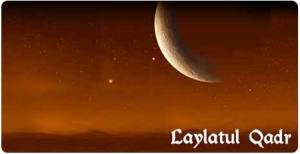 This is known as the Night of Decree. It has a special merit and is described in the Quraan as follows:

Therefore,  worshipping Allah in that night is better than worshipping Him a thousand months! Which is about 83 years and 4 months! This is probably longer then most of us will even live! So which of us will be crazy enough to waste this opportunity?

2. Quraan Revealed and Decrees sent down

“We sent it (this Quraan) down on a blessed night. Verily, We are ever warning [mankind that Our Torment will reach those who disbelieve in Our Oneness of Lordship and in Our Oneness of worship]. Therein (that night) is decreed every matter of ordainments. Amran (i.e. a Command or this Quraan or the Decree of every matter) from Us. Verily, We are ever sending (the Messengers), (As) a Mercy from your Lord. Verily! He is the All-Hearer, the All-Knower.” (Ad-Dukhan 44:6)

How blessed must the night, the Quraan was sent down, be?

There are two things perhaps its worth pointing out though. We all known that the Prophet (peace be upon him) was given the Quraan is segments:

“And those who disbelieve say: “Why is not the Quran revealed to him all at once?” Thus (it is sent down in parts), that We may strengthen your heart thereby. And We have revealed it to you gradually, in stages. (It was revealed to the Prophet SAW in 23 years.).” (Al-Furqan 25:32)

So if that the case, how could the Quraan have been revealed during Laylatul Qadr?

Muslims also believe in something known as the al – Lawh ul – Mahfooz (the Preserved Tablet). In this, Allaah recorded everything that was going to happen in the future, Since Allaah has infinite knowledge and well aware of our future actions. This same books has all the decrees and is described in the following narration:

Narrated Abdullah b. Amr b. al-As (may Allah be pleased with him): I heard Allahs Messenger (may peace be upon him) as saying: “Allah ordained the measures (of quality) of the creation fifty thousand years before He created the heavens and the earth, as His Throne was upon water.” [Saheeh Muslim, Book 033, Number 6416]

And it is Narrated Ubaadah ibn as-Saamit said, “O my little son, you will never find the taste of Eemaans reality until you know that whatever caught you would not have missed you and what missed you would never have caught you.

I heard Allaahs Messenger say: “Indeed the first thing which Allaah created was the pen and He told it to write.

It asked: O my Lord, what should I write?

Allah said: Write the destiny of everything until the Final Hour comes.”

Therefore, when people say it was written in your Destinty, they are referring to the above book.

So on laylatul qadr, the Quraan was revealed from this book.

When is the Night?

Narrated Aishah (may Allaah be pleased with her): Allahs Apostle (peace be upon him) said, “Search for the Night of Qadr in the odd nights of the last ten days of Ramadan.” [Saheeh Bukhaari, Volume 3, Book 32, Number 234]

Therefore, it could be 21st, 23rd, 25th, 27th or 29th. Some narrations indicate its on the last seven days and others say 27th. However, its best to seek it on all the odd nights (only 5 days!) and perhaps you will be rewarded for a lifetime!

How should one approach and benefit from this night?

Ideally, you should go and pray Taraweeh in the Mosque and complete the prayer with the Imaam, because the Prophet (peace be upon him) said: “Whoever stand in prayer with the Imaam until he (the Imaam) concludes the prayer, it is recorded for him that he prayer the whole night.” [Sunan Aboo Daawood, Sunan at – Tirmithee and others. Its chain of narrations is authentic. See Irwaa ul – Ghaleel, Number 447]

However, if you are unable to, then pray it at home.

Remember, make sure that you have made wudoo correctly, your clothes are clean, the area you are praying is clean and that you pray in a moderate pace and recite correctly. Its ok if you cant recite big soorahs, its the intentions that counts.

The Prophet (peace be upon him) said, “The reward of deeds depends upon the intentions and every person will get the reward according to what he has intended.”

You should recite Qunoot before rukoo, if you wish. The duas are here http://www.islamawareness.net/Dua/Fortress/032.html

Just recite Soorah fatiha, then your other Soorah, then after that, raise your hands and read those duas. Once you are done, go into rukoo and complete your prayer.

There was a sheikh who said when he was 12, he thought to himself, if Allaah will give us anything on this night, what are the main things I really wish for. He made a list of about 6 and asked for them every night (in the last ten days). He said 2 years later he had memorized the Quraan

So similarly, Look into your lives and see what it is you need to make them complete. Make your list, then after your Witr prayer, raise your hands up and ask Allaah, from the bottom of your heart, what it is you want. Also, cry if you can, and if you cant, then make yourself cry. I know it sounds strange, but once you break that shell around your heart, you will become more sincere.

Also, its Sunnah to say the following Dua:

O Allah! You are forgiving, and you love forgiveness. So forgive me.”

Remember, ask for whatever you wish, but dont forget to say for forgiveness, because the last place we all want to end up is in Hell…

Just in case you’re not sure what to ask for:

Dont ask for things like long life, more money, etc because all of this has already been apportioned for you and it cannot be changed.

As for those of who you may not be able to pray, you should recite Quraan instead. Quraan can be recited in any state, according to the strongest opinion (according to Dr. Bilal and others scholars), so dont follow the views of those who dont know! Allaah would not restrict the Quraan to certian people and certain times only!! So recite Quraan, perhaps recite a soorah that you love and read its translation. Or you can read other stuff like islamic articles, or some of the stories of the Prophets, or even ahadeeth. The point is to do something good. and after that, make your Dua sincerely.

And Finally, be consistent. Its only 5 nights, dont waste them. Repeat the same thing every night. Anyone and everyone who trys to distract you in these nights, are no doubt soldiers of shaytaan. Any friends who ask you to go out on this night, are the ones that will lead you to Hell. So take heed of your actions and Fear Allaah in all you do…

Remember..this might be your last Ramadaan…The last thing you want is to be in your grave, regretting not being a better Muslim in this life…Once you die, your judgment starts and there is no returning back!