Last weekend must be a nice weekend for us, because we had a good Indonesian or India cooking plan. First time I had a little discussion with my roommate Shavkat Abdujabarov. He is a master program student from Central Asia, exactly from Kyrgyzstan. He wanted know how to use rice cooker and how to cook Indonesian rice as well. So, I told him that we can try it in the weekend due to I did not have a special agenda or something else to do as well as him. At that time, I have no other idea to cook except only rice because we don’t have kitchen or something which probably can be used for frying some foods. After I discussed the idea with Shavkat, I did not forget to tell to my Indian friend who came to Istanbul as a researcher scholarship holder for eight months. His name is Muhammad Ilyas. He was so happy when I told him I wanted cook in my room.

On that day, after I wrote down to the paper whatever we need for making a delicious food I messaged Muhammad Ilyas to help me to find something in the market also for asking him maybe he has another idea. I waited him for two hours I thought that he did not come. After some time he came to my room then we went to the market. While we were walking I asked his opinion about what should we prepare for cooking. Then he made me sure that ‘as long as we have rice cooker we can make vegetables also’, he said. He used to use the rice cooker for frying something when he was in his own country. Shortly, I tried to trust him even though I had a bit afraid of what he said. Because I never used rice cooker for make something else except cooking rice. He told me that we can cook such nice vegetable or potatoes’ soup.

After we arrived in the market, we started to look for our need. To make potatoes’ soup of course we need something like; potatoes, red chili, green chili, some oil, onion etc. we also bought 1 kg rice and a bottle of soda water to drink which we called camlica. After we got all of what we need then going to the cashier to pay them. I surprised when I paid them because those were not as expensive as I thought before. We only got out of the money about eleven something Lira. When I pick them up I saw a packet of egg including of our buying. First of all I thought that it was taken by Muhammad Ilyas. In fact, he thought like what in my head either. When we were walking back to our dormitory he asked me why I took the packet of egg. Then he asked me to give it back to the market because we did not take it in our conscious. But I said it does not matter we can still use this for cooking and mixes it. Actually I didn’t like to give it back if I took it because of our mistake, because we did not check it before got out of the market. 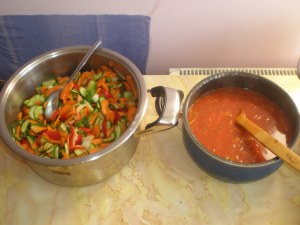 When we had finished shopping, then came back to dormitory in order to make the planning of cooking become true. At that time, Muhammad Ilyas is as a cooker whereas Shavkat and me as helper. Firstly, we washed all of vegetables after that Ilyas cut the vegetables which would be used for salata. In the same time I started cooking rice by using rice cooker. After the rice cooked, it took 30 minutes I took the rice then put into a water bottle which had been cut before. Then, Ilyas used the rice cooker to fry some onions, tomatoes and other spices. It might be not so simple work to fry something by using rice cooker because we have to keep the hot of rice cooker in a properly temperature unless the rice cooker could get damage. So, we had to open and close the cap of rice cooker often. After some time, some water was pour into the rice cooker in order to make soup. Into the soup we put small-cut potatoes, tomatoes and 2 eggs mixed together. For cooking soup we only waited for 20 minutes after then the soup had already been served. On that day, we had a good dinner that we ate together 4 persons all of us.